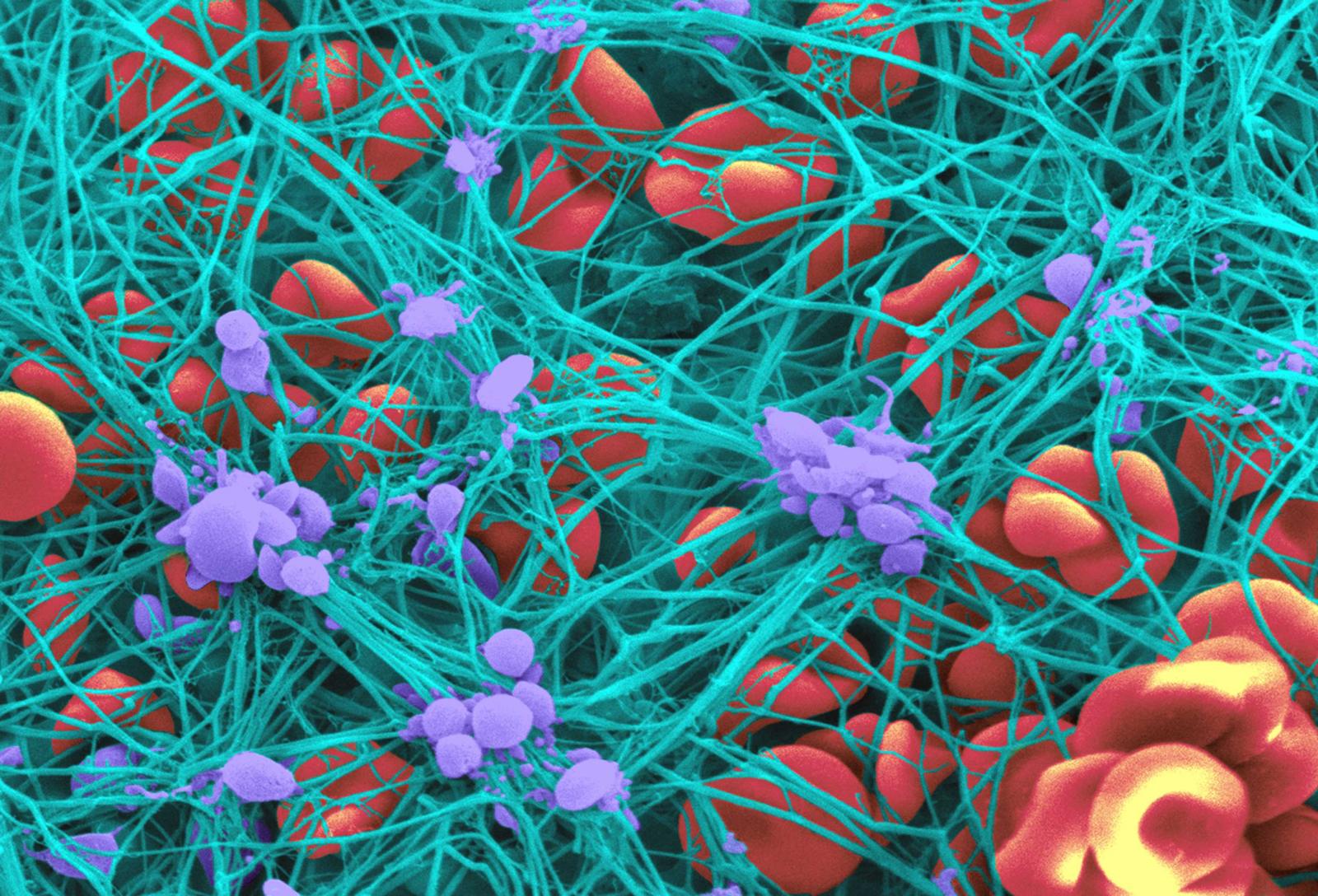 Scanning electron micrograph of a clot. Used with permission. www.nature.com/nature/journal/v413/n6855

Precise control of the blood-clotting system is essential for maintenance of the circulation in all higher animals. Deficient function of this system can lead to fatal bleeding following even a minor injury, whereas overactivity of this system can produce unwanted blood clots, resulting in blockages to critical blood vessels, as occurs in such diseases as heart attack and stroke.

Our laboratory and others have made considerable progress in understanding the molecular defects responsible for many of the less common subtypes of VWD. However, the molecular basis for the most common variant (type 1) still remains largely a mystery. In some patients, a mutation inactivating one copy of the VWF gene reduces plasma VWF, leading to bleeding; in others, the same change does not result in a significant problem. It is now clear that wide variations in disease among individuals with the same or similar defects in the VWF gene are due to the action of one or more additional "modifier" genes. Such modifier genes are also likely to contribute to the wide variation in VWF levels observed among normal individuals. Elevated levels of VWF produced in this way may result in an increased risk of blood clotting, in contrast to the bleeding tendency associated with low VWF.

To understand how such modifier genes might work, we have been studying the genetic factors responsible for variation in VWF level among inbred mouse strains. We identified one such novel modifier gene as a unique variant of the Galgt2 gene. In mouse strains with particularly low VWF, the Galgt2 gene has been turned off in the intestine, where GALGT2 is usually made, and instead turned on in endothelial cells, the cells that line all blood vessels. As a result of this switch, GALGT2 now subtly alters the VWF being made within the endothelial cell, resulting in accelerated removal from the blood and a marked decrease in the level of VWF. This unique mechanism could explain the action of VWD modifier genes in humans, as well as modifier genes for many other common genetic diseases.

In another series of studies, we showed that mutations in the gene for ADAMTS13, a protein that normally breaks down VWF in the blood, are responsible for nearly all inherited forms of thrombotic thrombocytopenic purpura (TTP), an often catastrophic blood-clotting disease. Our recent studies in mice suggest that microbial-derived toxins, together with additional genetic susceptibility factors, are required to trigger TTP in the setting of ADAMTS13 deficiency. Identification of these factors should lead to improved diagnosis and treatment for patients with this disease. (This work is supported in part by a grant from the National Institutes of Health.)

Coagulation factor V is a central regulator in the early phases of blood clot formation. Genetic deficiency of factor V results in a rare bleeding disorder called parahemophilia. Conversely, a subtle change in the factor V gene that increases the function of this protein, called factor V Leiden, results in an abnormal increase in blood clot formation. Factor V Leiden is remarkably common, (present in ~5 percent of the population) and may contribute to up to 50 percent of hospital admissions for blood clot-related illnesses.

Our lab has developed genetically engineered mice completely deficient in factor V as well as mice producing factor V Leiden in place of the normal factor V gene product. We are combining the factor V Leiden mutation with mutations in other mouse clotting factor genes to identify interactions that might be important in humans with an inherited tendency to suffer blood clots. Several blood proteins have been identified that when only mildly reduced can cause markedly increased clotting in factor V Leiden mice. In related experiments we are screening mice carrying mutations randomly induced throughout the genome, in an effort to identify many of the genes that are capable of acting as modifiers for factor V Leiden in mice, as well as in humans. Characterizing these genes may provide valuable new information to help us distinguish the 10 percent of humans with factor V Leiden who will develop a serious blood clot during their lifetime from the 90 percent who will remain asymptomatic.

Combined deficiency of coagulation factor V and coagulation factor VIII is another inherited bleeding disease under study in our lab, in collaboration with Randal Kaufman (HHMI, University of Michigan Medical School). We previously identified the molecular basis for this disorder as deficiency of the cellular protein LMAN1 (also known as ERGIC53). Though we were able to find LMAN1 gene mutations in many combined deficiency patients, the cause of this disorder in approximately 30 percent of these individuals remained unexplained. We recently identified mutations in another gene, termed MCFD2 , as the cause of this disorder in this latter group of patients. The complex of MCFD2 and LMAN1 serves as a carrier for a subset of proteins, including factors V and VIII, that are destined for export from the cell. These findings provide the first example of such a specific transport pathway within the cells of higher organisms. We are studying genetically engineered mice deficient in LMAN1 in an effort to identify other proteins that, along with factors V and VIII, also depend on this unique intracellular pathway for their production. In addition to providing insight into the processes by which proteins are synthesized and exported from the cell, this work identifies a novel target for the development of new anticoagulant (blood-thinning) drugs. (This work is supported in part by a grant from the National Institutes of Health.)

We recently showed that the bacterial protein streptokinase, an activator of plasminogen, is a key factor for the invasiveness of group A streptococci (GAS). GAS are the cause of strep throat, as well as an unusually severe form of skin infection in humans (flesh-eating bacteria). Introducing a human plasminogen transgene rendered the resulting mice remarkably sensitive to GAS, partially explaining why these bacteria generally only infect humans and suggesting a major role for the blood-clotting system in our body's defense against infection.

Analyses of mice we have engineered to be genetically deficient in PAI2 or vitronectin (a cofactor for PAI1) have also provided important insights into the biologic function of these proteins. This work has unmasked previously unappreciated roles for these proteins in the blood-clotting system and in the development of several important diseases, including atherosclerosis, the underlying cause of heart attack and stroke. The results of our studies may provide valuable new information about how these common human diseases develop, as well as suggesting new approaches to therapy.