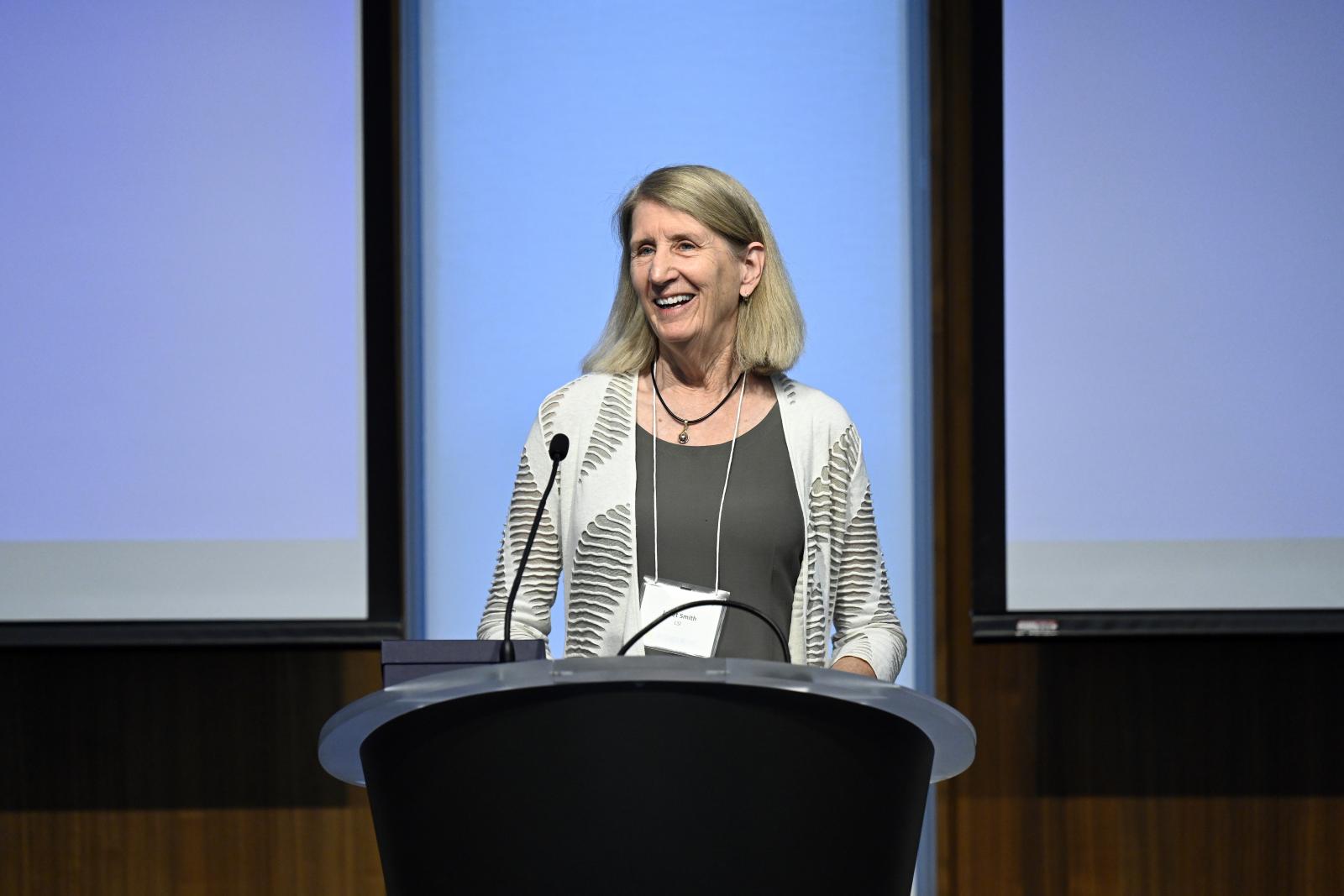 Janet Smith, Ph.D., presents at the ceremony installing her as the Rita Willis Professor of the Life Sciences

The professorship is named in honor of U-M alumnae Rita Willis (A.B., ’45), who donated a generous portion of her estate to the LSI to create a substantial and lasting impact on the life sciences.

“The Rita Willis Professorship honors a woman who was a great supporter of the life sciences at the University of Michigan,” said U-M President Mary Sue Coleman, Ph.D., at a Sept. 15 ceremony installing Smith to the new position. “It is appropriate and deserving that its first recipient is a woman who has done so much to advance her field at U of M and worldwide.”

As a research professor at the LSI, Smith investigates how the structures of proteins determine their functions within cells, and what happens when structural changes cause proteins to malfunction. Her lab employs a structural biology technique called x-ray crystallography, which uses x-ray beams to map the positions of atoms in crystallized proteins, as well as a variety of biochemical methods to investigate protein function. Her work has impacted scientific understanding in areas ranging from antibiotic synthesis to viral pathogenesis.

“The funding from this professorship will now give us an opportunity to be a bit bolder in exploring new areas that might not be ready for traditional funding sources,” says Smith, who is also the LSI associate director and a professor of biological chemistry at the U-M Medical School. “These types of endowed positions are a wonderful honor, because they show that university supporters appreciate the level of scholarship taking place here and want to invest in furthering that scientific exploration.”

These positions are much more than a title. They allow us to recognize the meaningful service and novel research of our outstanding faculty, while providing the critical discretionary funding that enables innovative discovery science. 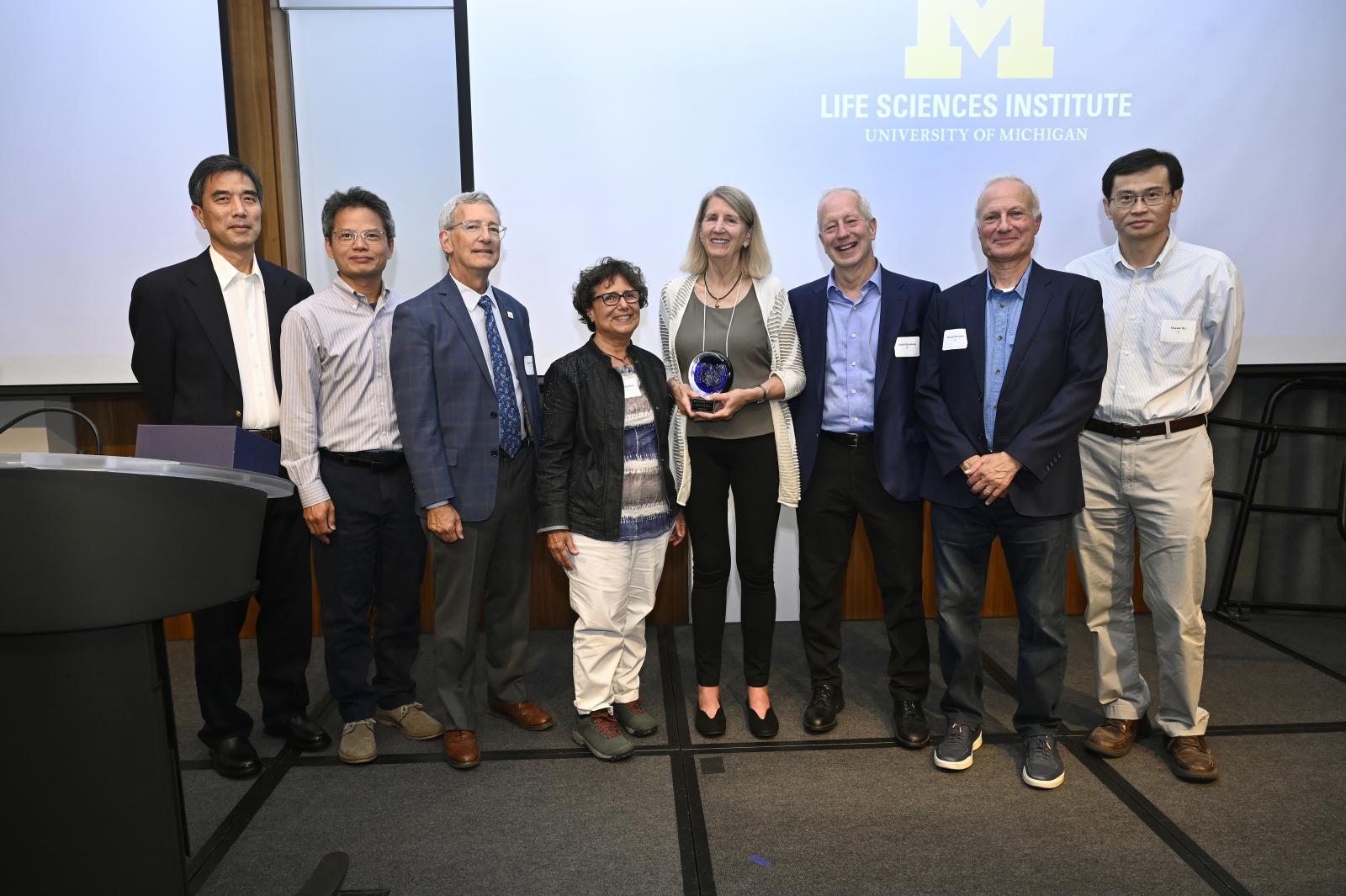 In addition to running an accomplished research program, Smith is an internationally recognized leader in technology development for the field of structural biology. She has served as scientific director of a pair of structural biology beamlines at the Advanced Photon Source at Argonne National Laboratory for more than 20 years and is a frequent advisor to synchrotron radiation facilities in the U.S. and abroad. She received the University of Michigan’s Distinguished Faculty Lectureship Award in 2016,and was named the Martha L. Ludwig Distinguished University Professor of Biological Chemistry in 2021. In 2020, she was elected to the National Academy of Sciences.

While LSI faculty have previously held endowed professorships, these have been provided through the academic departments where the faculty hold joint appointments. Smith’s appointment to the Rita Willis Professorship represents the first endowed position provided directly by the LSI.

“These positions are much more than a title. They allow us to recognize the meaningful service and novel research of our outstanding faculty, while providing the critical discretionary funding that enables innovative discovery science,” says LSI Director Roger Cone, Ph.D. “I am thrilled that we are able to recognize Janet this way and look forward to providing this type of support to more LSI faculty in the future.”