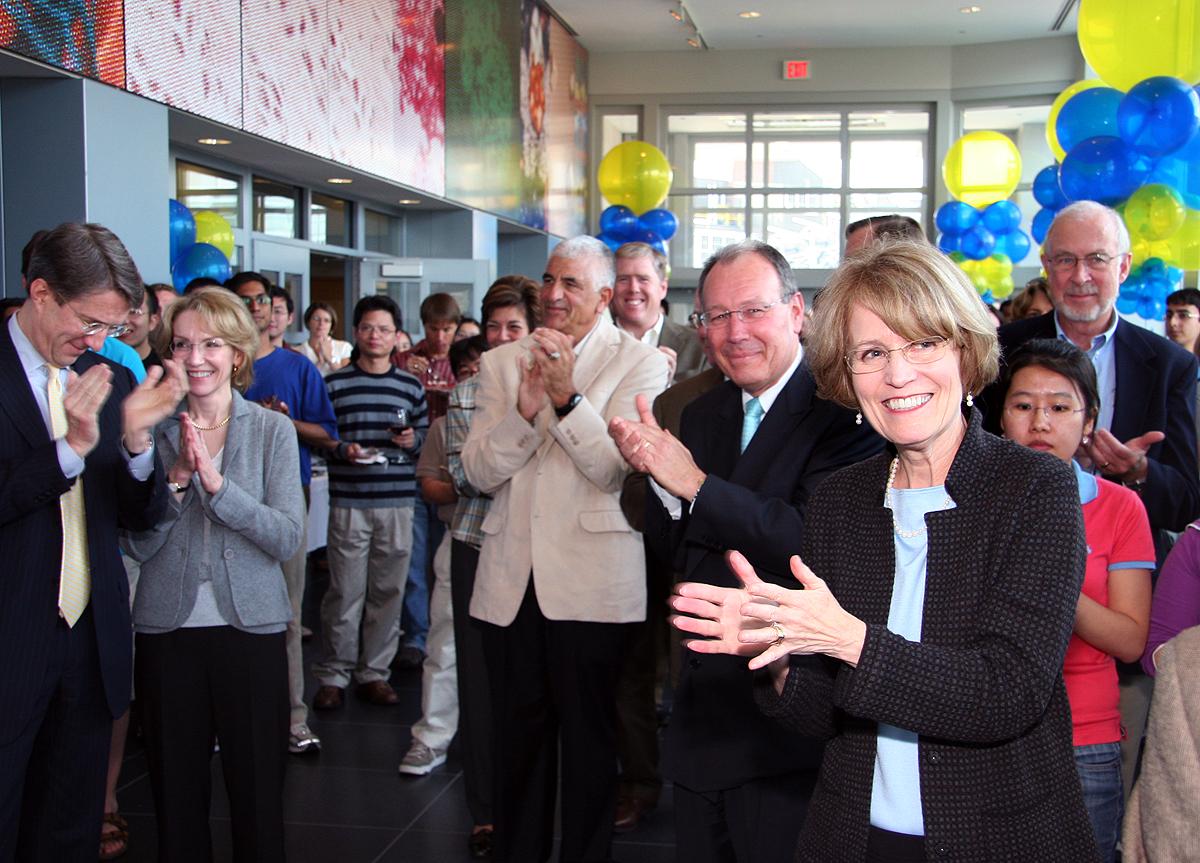 Mary Sue Coleman (front right) attends an event at the Life Sciences Institute in 2008, celebrating the naming of the LSI directorship in her honor.

The building — to be called Mary Sue Coleman Hall — is the first academic building on the Ann Arbor campus to be named for a woman. Coleman, who served as U-M president for 12 years before retiring in 2014, was the first woman appointed to that position.

The Board of Regents unanimously approved the renaming at its March 25 meeting.

“To me, this richly deserved naming of Mary Sue Coleman Hall is a reflection of all she has done to enhance the University of Michigan and heighten the impact of higher education on our society,” said President Mark Schlissel. “Thanks to President Emerita Coleman, U-M has a faculty rich in intellectual diversity, a physical campus that is the envy of our peers, and numerous academic programs that are amongst the best in the world.”

The research facility sits at the nexus of the Central and Medical campuses and will bear the name of Coleman, a biochemist who built a distinguished career through her research before her sharp rise through the ranks of higher education administration.

“I am deeply honored and touched by this action from President Mark Schlissel, Chair Denise Ilitch and the entire Board of Regents. For me, helping to build the Life Sciences Institute into the research powerhouse it is today was the opportunity of a lifetime,” Coleman said. “I am grateful to those inaugural Michigan faculty who joined this endeavor early on and especially to Dr. Alan Saltiel and Liz Barry, who were the institute’s leadership team in its early years.

“The building, a spectacular example of superb research laboratory architecture, vividly demonstrates the importance of light, airy spaces where ideas can blossom, collaborations can thrive and novel discoveries often emerge. I am simply thrilled.”

Coleman was the first woman to serve as president of the university, from August 2002 to June 2014. During her tenure, she was named one of Time Magazine’s “10 best college presidents” and was popular with students, faculty and staff.

She was involved in a number of important initiatives, endeavors and decisions that helped shape U-M. She brought the Life Sciences Institute to fruition, including the hiring of its first director and 25 faculty, and launched a successful campaign to hire 100 junior faculty who specifically engage in scholarship that crosses academic boundaries.

“This honor of our former president is so welcome and so exciting,” said Board of Regents Chair Denise Ilitch. “Although I was not on the board when we hired President Coleman, it was always my understanding from my former colleagues that she was someone that the board knew could fulfill the vision of the Life Sciences Initiative — from completing the building, to hiring our amazing faculty, to supporting the research in all ways possible.

“It was not a given at the time, but her laser focus, support and attention paid off, helping to create the wonderful institute that we are so proud of today.”

Her presidency was marked by an unflagging commitment to deepening the diversity of the student body, a dedication that took her and the university to the U.S. Supreme Court in 2003, when justices upheld the use of affirmative action in U-M admissions. While state voters outlawed affirmative action in 2006, Coleman remained steadfast in seeing that U-M do everything possible to enroll students of different backgrounds and ethnicities.

She led “The Michigan Difference,” a campaign to raise $2.5 billion for the future of the institution. At its conclusion in December 2008, the campaign finale stood at $3.2 billion — at that time the most ever raised by a public university. In 2013, the university launched its $4 billion “Victors for Michigan” campaign under her leadership. The campaign was completed in December 2018 and raised $5.28 billion.

Since retiring as president, Coleman has maintained an office in the building that now carries her name.

To increase community input and diversity to the options considered for the naming of campus buildings and other spaces on campus, a task force consisting of faculty, students, staff and administrators will be launched in the 2021 winter semester.

Coleman came to U-M from the University of Iowa where she was president for seven years. Following her retirement from U-M, she served four years as president of the Association of American Universities, an alliance of leading research universities of which U-M is a member.

As a biochemist, Coleman built a distinguished career through her research on the immune system and malignancies. For 19 years, she was a member of the biochemistry faculty at the University of Kentucky.

“Dr. Coleman has been a tremendous champion for the Life Sciences Institute since its conception, not only through philanthropic support but through her passion for the institute’s model of bringing together leading scientists from across disciplines to drive novel discoveries. Her support has been invaluable to the LSI’s success, and we are thrilled that the institute will now be in a building honoring her monumental contributions to the university and to scientific innovation.”

The Life Sciences Institute is a hub for collaborative bioscience discovery at U-M. The institute’s 22 faculty members hold joint appointments both at the LSI, where their labs are located, and within departments at the Medical School, School of Dentistry, College of Pharmacy and LSA. In addition to faculty labs, the LSI is home to four research cores specializing in structural biology and identifying compounds that interact with disease targets. These cores partner with scientists across U-M’s broad research enterprise to advance basic biology and academic drug discovery research.

The LSI also provides novel educational programming for scientists ranging from the high school through postdoctoral levels. At any given time, nearly 200 students and postdoctoral fellows are gaining valuable lab experience and driving discovery in LSI labs.

The directorship of the institute, currently held by Roger D. Cone, is an endowed position named in honor of Coleman in recognition of the key role she played in LSI’s development.

“Dr. Coleman has been a tremendous champion for the Life Sciences Institute since its conception, not only through philanthropic support but through her passion for the institute’s model of bringing together leading scientists from across disciplines to drive novel discoveries,” Cone said. “Her support has been invaluable to the LSI’s success, and we are thrilled that the institute will now be in a building honoring her monumental contributions to the university and to scientific innovation.”

Constructed in 2003, Mary Sue Coleman Hall is a six-floor, 236,000-square-foot facility that houses laboratories, offices and support spaces for the Life Sciences Institute. It brings together researchers with diverse expertise in an open-laboratory setting that is purposefully designed to foster creative, interdisciplinary approaches to advancing understanding of the fundamental processes of health and disease.

This article was written by Kim Broekhuizen, U-M Public Affairs, and originally published in The University Record. Read the original article here.