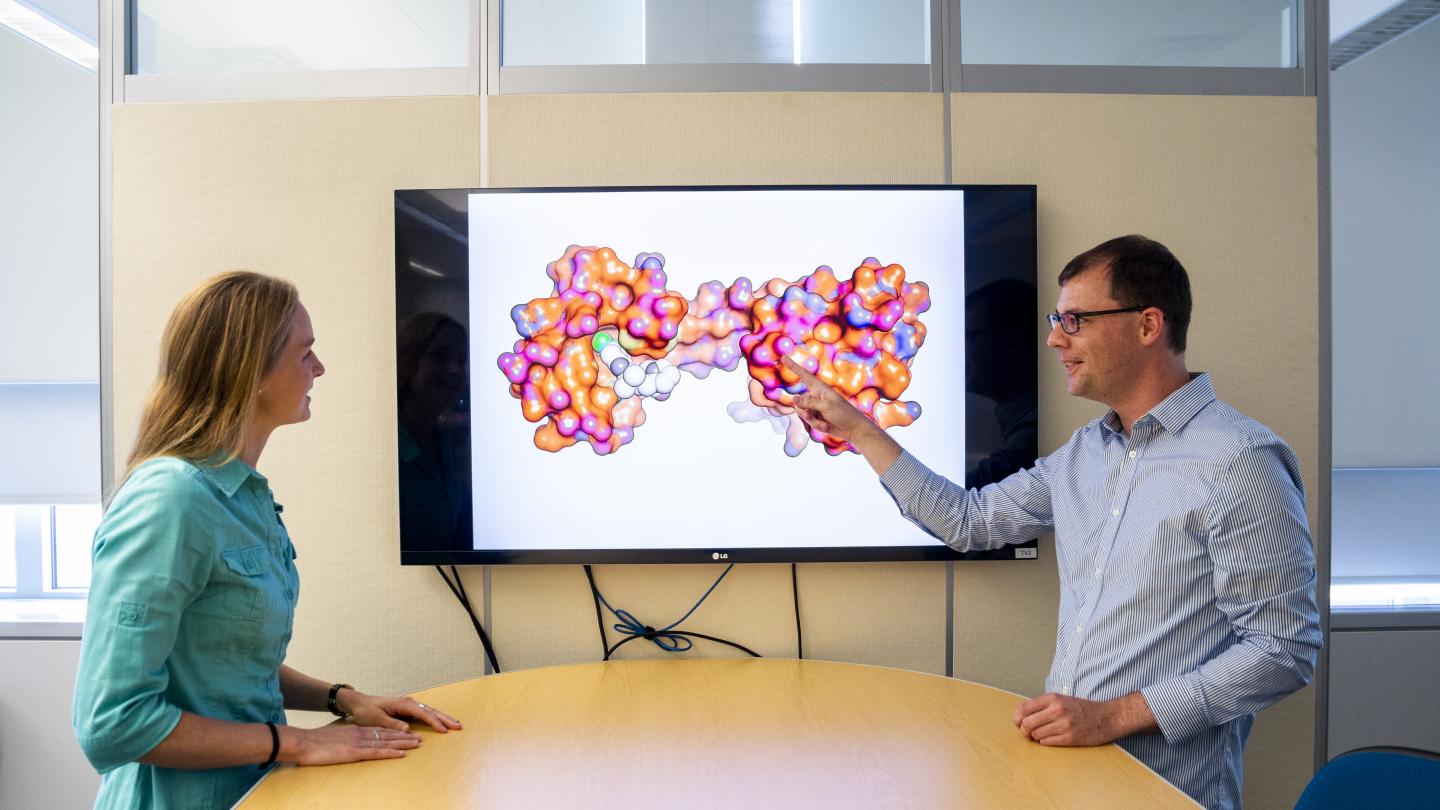 Let’s say you are a graduate student working toward your Ph.D. in medicinal chemistry. You are immersed in your own research projects — projects that will eventually form the basis of your thesis and enable you to graduate. You find out that a graduate student from another program has some recent data that tangentially relates to your project.

But you’re studying different disciplines in different labs. Your funding sources don’t overlap. Your faculty mentors each have their own research programs to focus on. Taking a detour from your thesis work just isn’t part of the grad school plan.

Unless you’re a graduate student in the University of Michigan Life Sciences Institute.

Since its inception, the LSI has served as an incubator for collaboration at U-M. Its open-lab space is home to researchers in fields ranging from biology to medicine, from chemistry to structural biology. The institute is intentionally set up — both physically and philosophically — to promote opportunities for the cross-pollination of ideas that leads to novel scientific inquiry.

To ensure those opportunities extend not just to primary investigators, but to the graduate students and postdoctoral fellows within their labs, in 2017 the institute launched LSI Cubed.

Based on the university’s MCubed program, this donor-funded initiative provides research funds for trainee-initiated projects that span two or more labs within the LSI, engaging students and postdocs in multidisciplinary research early in their scientific careers. The idea came from LSI graduate students and postdocs, as a way to further promote collaboration across the institute and “encourage trainees to take the lead and learn what others are doing in their labs, rather than depending on faculty mentors to create the projects,” the trainees wrote in their original pitch.

And that’s how then-graduate students Amy Fraley and Tyler Beyett came to lead their own joint research project at the LSI. 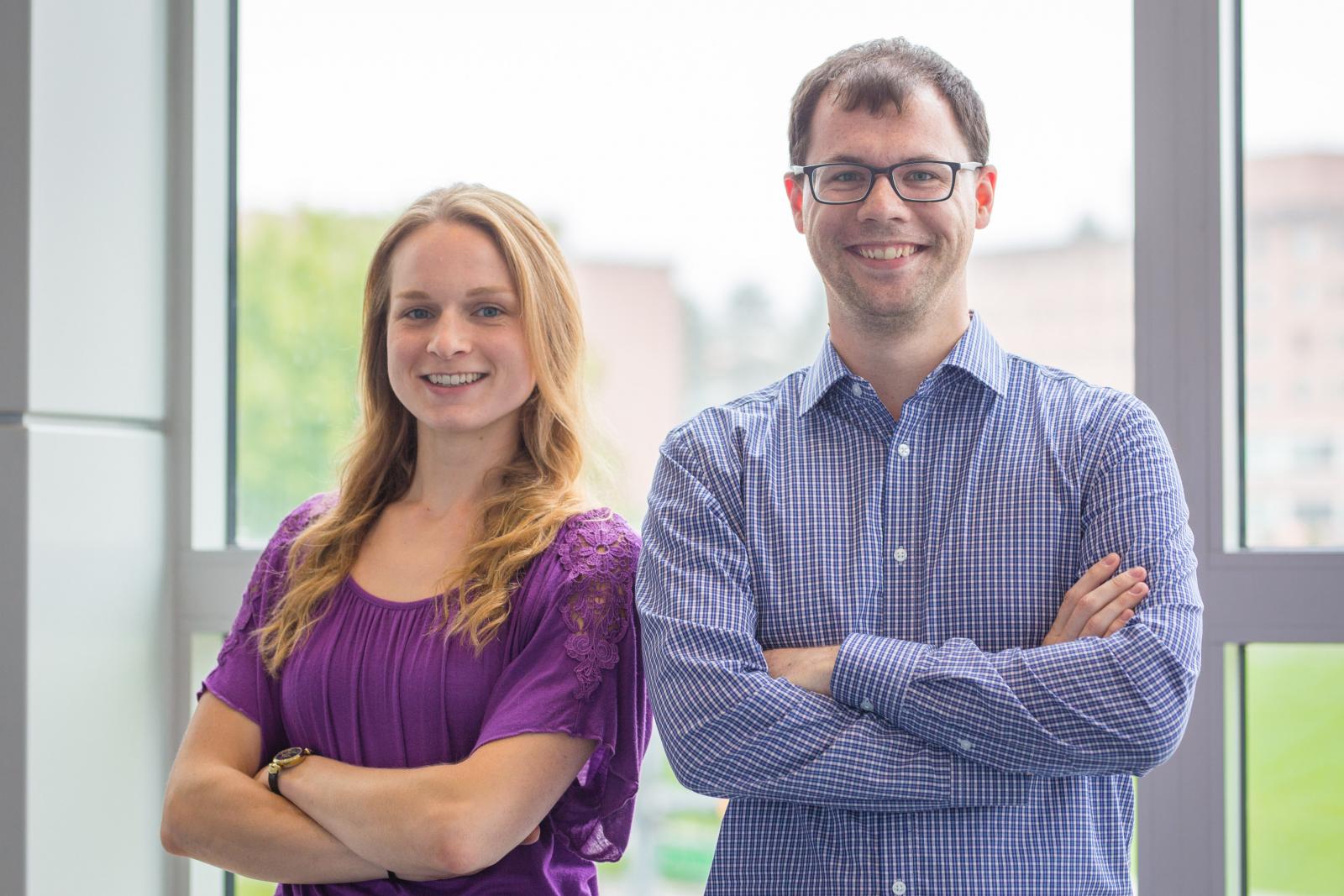 In John Tesmer’s lab on the third floor of the LSI, Beyett was using structural biology to investigate a protein-protein interaction involved in pathological cardiac hypertrophy, an enlargement of the heart that increases the risk of heart attacks.

One floor up, in David Sherman’s lab, Amy Fraley was studying how fungi produce malbrancheamide, a natural product with potential pharmaceutical applications.

“I had kind of the beginnings of something, but I didn't really know where to go with it,” says Beyett, who is now a postdoctoral research fellow at the Dana-Farber Cancer Institute and Harvard Medical School. “I was presenting my data at a chalk talk, and afterwards Amy came up and said, ‘I'm studying how this natural product is made, and there are reports that it inhibits one of your proteins.’ ”

The two discussed how it might be interesting to study malbrancheamide in some of Beyett’s experiments. But the idea never went much beyond those conversations, until the LSI announced the launch of the new LSI Cubed program.

The opportunity for independent funding — along with the chance to manage their own project  — gave Fraley and Beyett the motivation they needed to begin pursuing the research in earnest.

"There are always these high-risk projects built around incredibly interesting ideas in the back of your mind, and sometimes you just don’t get around to working on them,” says Fraley, who is now a postdoctoral research fellow at ETH Zürich. “That’s why the LSI Cubed program is so great. Once we applied for the grant and received our own funding, we had a reason to go after this question. It was our own independent project, so we really had the drive to make progress on it.”

The first round of LSI Cubed grant awardees were announced in December 2017. Twenty months later, Beyett and Fraley published their high-impact results in Proceedings of the National Academy of Sciences, offering researchers a powerful new tool for exploring protein-protein interactions.

The protein at the center of their study is called calmodulin. Specifically, Beyett wanted to understand how it binds to and inactivates another protein called G protein-coupled receptor kinase 5 (or GRK5). Blocking this interaction represents a potential therapeutic strategy for preventing heart failure, but scientists first need a better understanding of how the two proteins bind and interact.

One way to probe protein-protein interactions is to inhibit one of the proteins and see how the interaction changes. Fortunately, the natural product Amy was studying, malbrancheamide, is a reported calmodulin inhibitor.

When Fraley and Beyett applied malbrancheamide to their experiments, they realized that the information they uncovered had far broader potential than investigating just this one interaction.

“The data were not at all what we had anticipated, which often happens in science,” Fraley recalls. “And it just so happens that, in this case, what we got was even more exciting than what we had expected.”

Whereas most calmodulin inhibitors block the activity of the entire protein, Beyett and Fraley discovered that this natural product only partially blocked the protein, thus selectively inhibiting its activity. With this partial inhibition, they were able to obtain a much more precise picture of how calmodulin interacts with GRK5.

And because calmodulin interacts with more than 200 proteins in the human body, it provides a new approach to studying how these interactions affect health and disease.

“Using this natural product will tell us things that we can’t learn from existing protein structures or calmodulin inhibitors,” Fraley adds. “From a fundamental research point of view, our data offer a proof-of-concept for how this natural product can be a really valuable chemical biology tool.”

With its open-door lab policy, collaborative ethos, and wide variety of topics being studied, the LSI is the perfect environment for something like this.

Beyett and Fraley think it’s unlikely that they would have made this exciting discovery without the extra push from LSI Cubed.

“The program really motivates graduate students and postdocs to not just talk about our research with scientists who are outside of our labs, but to take these riskier ideas and try them out,” Beyett says. “And with its open-door lab policy, collaborative ethos, and wide variety of topics being studied, the LSI is the perfect environment for something like this.”

Beyond providing funding for projects that may be higher-risk or outside the scope of any one lab, LSI Cubed provides important career-building skills to give LSI graduate students and postdocs a competitive edge as they move forward in their research careers. Trainees gain experience in designing, executing and running the budget for an independent research project.

The program represents the type of unique tools that the LSI is able to offer its trainees, along with access to faculty spanning a variety of disciplines and high-tech cores and resources, says LSI Director Roger Cone.

“We work hard to create learning opportunities for the graduate students and postdocs in our labs that will help them become the next generation of leaders in science,” Cone says. “And the multidisciplinary nature of the institute puts us in a unique position to foster this type of trainee-led, transdisciplinary research.”

If you would like to help support the LSI Cubed program, you can learn more and donate online.