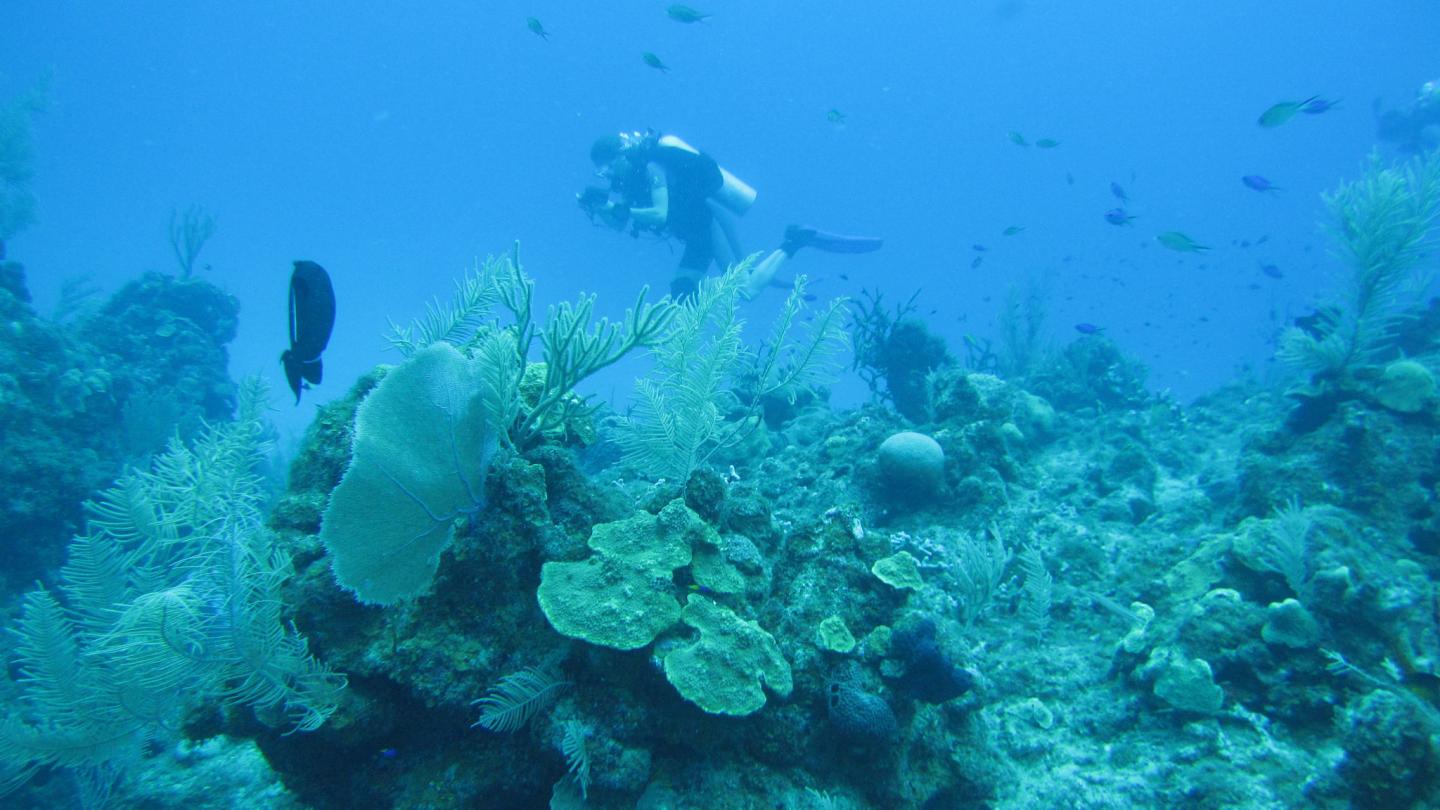 Early in her college career, Amy Fraley set her sights on becoming a marine biologist. She decided that getting her  scuba diving certification would be key in achieving that goal, allowing her to immerse herself in the ecosystems she was studying.

Now a graduate student at the University of Michigan College of Pharmacy and a researcher in the lab of David Sherman, Ph.D., at the U-M Life Sciences Institute, Fraley has made a few changes to her plans. She swapped her marine biology major for a chemistry major, swapped her immediate career plans for graduate school and swapped her tropical diving ambitions for cold-water diving on shipwrecks in the Great Lakes.

But Fraley was right about the usefulness of that diving certification. It was a major factor in securing her spot on an expedition to build scientific collaborations where strict barriers have prevented access for more than half a century — in Cuba.

Diving into Science Diplomacy in Cuba

Check out footage from the trip.

During her time at Millersville University in Pennsylvania, Fraley sought out undergraduate research opportunities that aligned more with her updated goal of studying the chemistry within marine organisms. That’s how she first found Sherman’s lab, building a connection that ultimately led to her enrollment in U-M’s Program in Medicinal Chemistry.

“It was very serendipitous that I found David’s lab, because at the time I didn’t know much about his research,” Fraley recalls. “It turns out, it was exactly what I wanted to be doing.”

Sherman’s research program studies the complex biological compounds made inside microorganisms. Known as “natural products,” these bioactive substances are often associated with defense mechanisms that have evolved over millions of years. The principal idea behind the research is to harness the power of these chemical reactions, letting nature perform transformations that would be overly laborious if not impossible to do at the bench. Many of the best-known antibiotics are natural products — like rapamycin, which comes from bacteria found in an Easter Island soil sample and is now an FDA-approved immunosuppressant.

This research has taken Sherman from the depths of the Red Sea to the Mount Everest Base Camp in the Himalayas in search of new organisms and natural products that could form the basis of future medicines.

The goals for this trip to Cuba, however, did not include any sample collection. There is much relationship-building that must take place between the U.S. scientists and their Cuban counterparts first.

“Initially, our goal is to start forming some collaborations — identify who we can work with, how we can help them and what they can do to help us,” Fraley says. “It’s more like science diplomacy at this point.”

The trip also allowed Sherman to fulfill some of his goals as Fraley’s mentor.

“I wanted Amy to have the professional experience of interacting with scientists in other parts of the world, and the experience of diving on some incredible coral reefs,” he says. “I knew she was an accomplished diver, and I was really interested in giving her the opportunity to see first-hand the type of places where we tend to collect samples.”

That opportunity arrived when Sherman was contacted about a trip organized by the Cuban Marine Research and Conservation Program, or CubaMar. As a project of the Ocean Foundation, CubaMar encourages scientific research collaborations between Cuba, the United States and other neighboring countries, with the goal of improving marine conservation practices and policy in a country where political isolation has long impeded scientific progress.

'Punching above its weight class'

In late-2014, the U.S. government announced its intentions to restore relations with Cuba. With improved access to the nation, scientists began to learn more about how the Cuban science program “punches above its weight class,” as a 2016 Nature article put it. But they also witnessed how research efforts have been weighed down by the U.S. embargo and other barriers to resources.

Cuban researchers have been largely cut off from much of the global scientific community for more than 60 years. Speaking to journalists from Nature and Science, Cuban scientists detailed how the U.S. embargo has stymied access to everything from basic reagents to the Internet bandwidth needed to submit a scientific article.

An internal lack of funding, too, limits what the researchers can accomplish. The Cuban government’s entire gross domestic product is half of what the U.S. spends on research alone.

Yet the country has continued to prioritize scientific research — especially research that the government believes will advance national well-being. In a 1960 speech, less than a year after taking office as the prime minister, Fidel Castro declared that “The future of our country has to be necessarily a future of men of science.” The quote remains engraved on the facade of the Academy of Sciences of Cuba, providing a prominent reminder of that vision.

And even without access to many of the resources enjoyed by wealthier nations, Cuban scientists have made noteworthy progress in fields that the government has identified as being of national importance. In 2015, Cuba became the first country recognized by the World Health Organization as having eliminated mother-to-child transmission of both HIV and syphilis — a reflection of the nation’s focus on research to improve human health.

Fields such as biotechnology, human health, ecology and conservation, in particular, have benefited from their high rank on the government’s list of priorities.

With a research program perched perfectly at the crossroads of these areas, Sherman jumped at the chance to establish personal connections with marine scientists from the historically isolated nation. 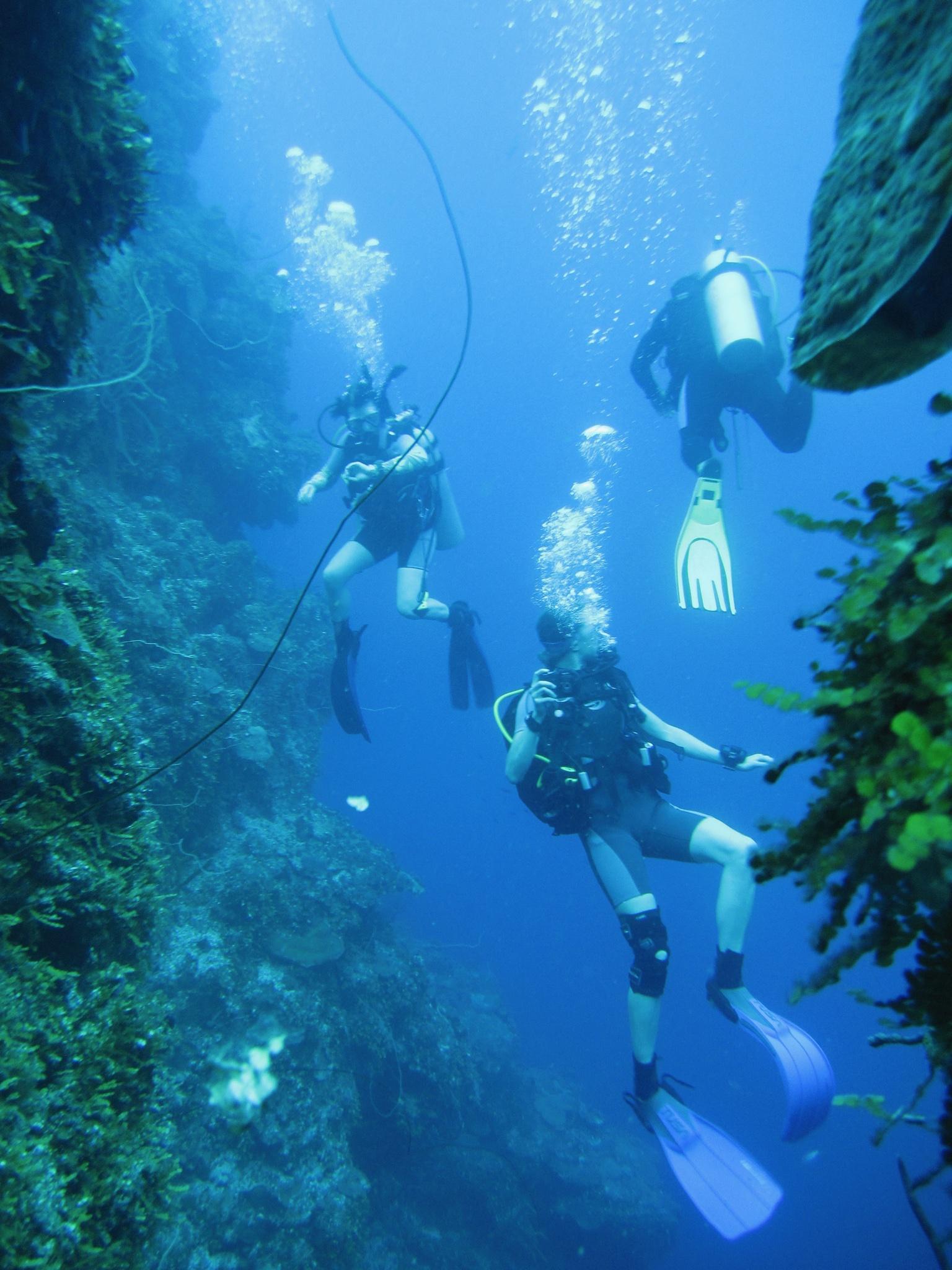 Members of the expedition in action.

During their 10-day trip in August, Sherman and Fraley encountered a broad range of fungi and cyanobacteria, much like those the lab typically works with, while exploring caves in Guanahacabibes National Park and Viñales and diving in nine ecologically diverse sites within the Maria la Gorda reef system.

And, most importantly, they met with several scientists with whom they hope to build collaborations.

“This was a great opportunity, even though it was clear we weren’t going to have time to get permits in place to collect any samples while we were there,” Sherman says. “Especially in places like Cuba, you really have to make connections with people ahead of time.”

The hope is that the alliances formed during this trip will enable the scientists to begin developing projects that will benefit research in both countries.

“Without these collaborations, neither side can really tap into the potential of the biodiversity there,” Fraley explains. “As Americans, we can’t go near the coastal regions without permission from the Cuban government, and that has to come through connections with the university researchers and marine scientists working in Cuba. And, on the other side, the tools and techniques we’ve built in our program at U-M don’t really have a counterpart there yet.”

A master diver himself, Sherman is looking forward to gaining greater access to the reefs — where he hopes to discover new organisms and molecules to add to U-M’s library of more than 30,000 natural product extracts.

“Because of a general lack of tourism, their reefs are relatively pristine,” Sherman says. “The starting point for so much of our work is the microbes that come from these biologically diverse hotspots that we collect in.

The U-M researchers also look forward to learning more about the conservation research taking place in Cuba, and the Cuban scientists are equally eager to share their advances with other nations.

During their trip, for example, Fraley and Sherman observed the novel approaches that Cuban marine ecologists have developed for regrowing damaged coral. These methods might aid efforts to rescue U.S. reefs, which are on pace to disappear as early as the coming two to three decades.

The Cuban researchers, too, stand to benefit from collaboration with Sherman’s lab, gaining access to technology and techniques that are unavailable in their country — such as advanced DNA sequencing. “We could help in so many ways in that area alone,” Sherman notes.

Beyond providing specific tools, such collaborations offer a basis for new research programs in Cuba by providing the expertise to connect marine microbiology research to biotechnology and human health.

“I don’t know of anyone there who’s really working in my area, spanning the scope of marine microbiology and natural products discovery,” Sherman says. “So we bring capacity-building. We bring the expertise to help them develop a sustainable research program in natural product discovery, and that leads to the potential for drug discovery. And the potential for drug discovery is of high interest to most scientists who are concerned about improving human health.”

The benefits of this type of open, collaborative science can extend far beyond the specific researchers or labs involved. Sherman’s collaborations, for example, often lead to the characterization of new natural products, which researchers across academia and industry can analyze for their disease-fighting capabilities.

Sherman and his colleagues have been building up a natural products library at the LSI that complements the university’s synthetic chemistry library, which is also accessible to other U-M researchers and outside groups through the LSI’s Center for Chemical Genomics.

“The fact that we have a natural product library in addition to the synthetic chemistry library allows investigators to essentially screen both types of compounds to find the best agents for their targets,” Sherman says. “So, we want this library to be as diverse as possible.”

And beyond benefiting specific institutions, data published in a recent Nature commentary showed that this type of international collaboration also can have an impact on the scientific field as a whole.

The analysis of publishing and citation data revealed a strong correlation between a nation’s “openness” — the number of studies it publishes with authors from other nations, as well as the ability of its researchers to relocate — and its scientific impact.

The authors of the commentary emphasize that nations wanting to maximize their scientific impact would benefit from increased international collaboration, and they recommend that funding agencies “move away from policies that fund only national researchers,” and instead link domestic scientists to the best science, “wherever it is.”

Sherman is hopeful that the recent inroads to Cuba will continue to allow for such links, even if the current thaw in relations between the U.S. and Cuba does not continue.

“I think there’s hope, because there are still active interactions and collaborations between the U.S., CubaMar and the Cuban scientists,” Sherman says. “Things are heading in the right direction.”