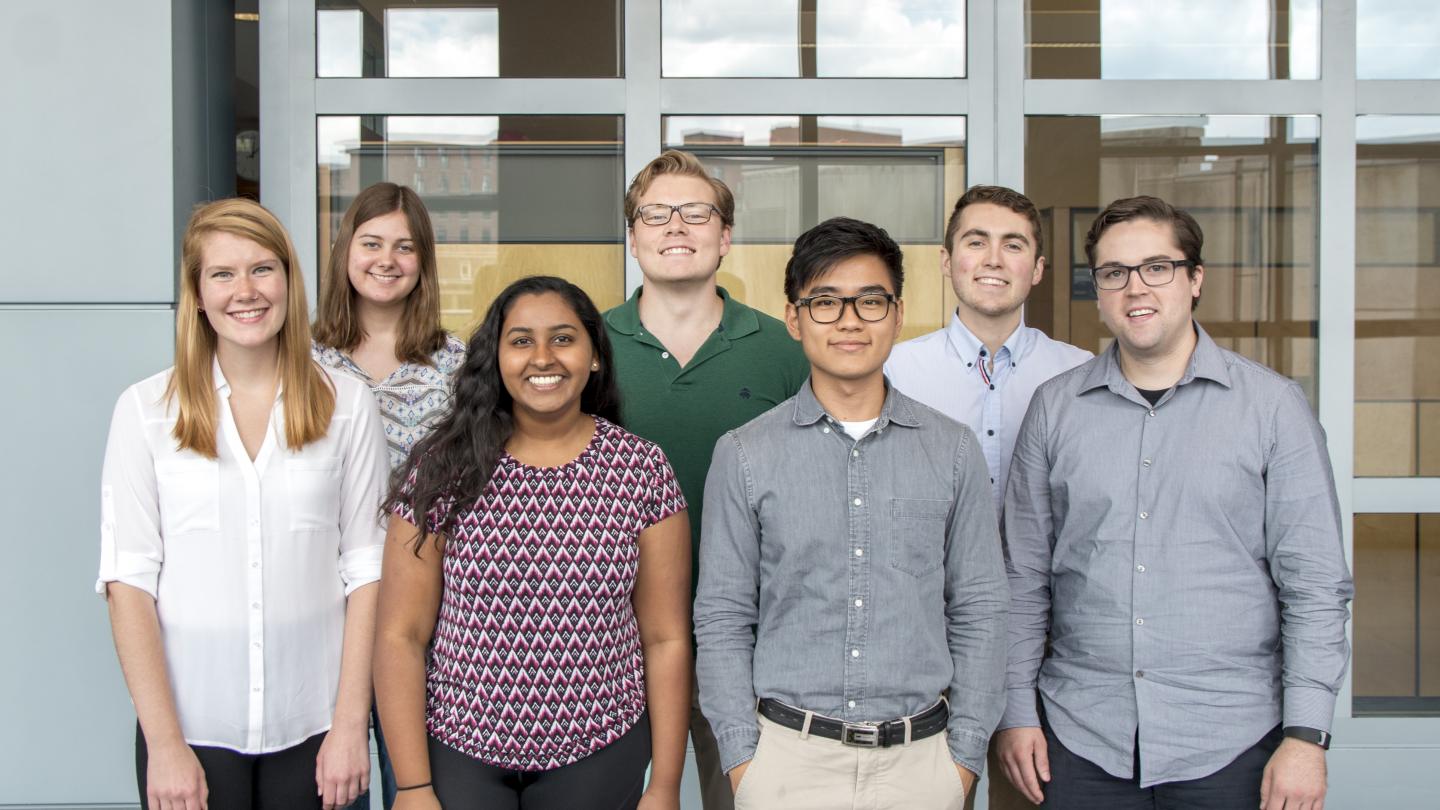 In the last century, Michigan was a driving engine of America’s manufacturing economy. Today, programs like the Perrigo Undergraduate Fellowship at the University of Michigan Life Sciences Institute are helping to fuel a new knowledge-based economy in the state.

The fellowship enables outstanding students from colleges and universities across Michigan to spend 10 weeks immersed in the ongoing work of a leading bioscience lab.

The program was founded in 2004 and funded by the Allegan, Michigan-based Perrigo company — the world’s largest manufacturer of over-the-counter healthcare products. (The company has since expanded its global reach and moved its headquarters to Dublin, Ireland.)

Over the years, dozens of students’ lives and careers have been transformed by the fellowship, including these three students from the seven in the 2017 cohort: 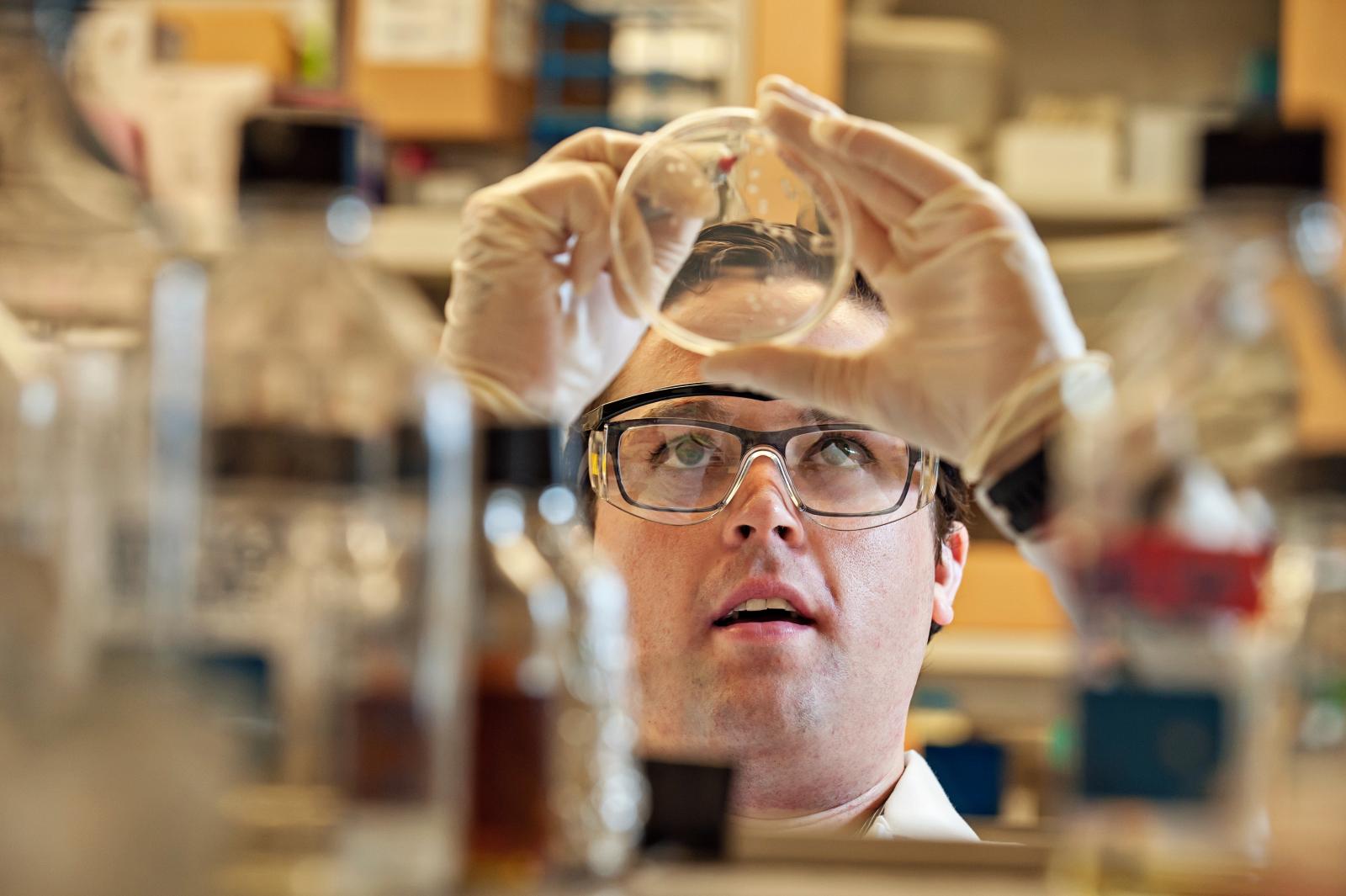 Alex Johnston grew up playing ice hockey, so he’s no stranger to the physical toll of contact sports.

As it turns out, Johnston’s injuries had an upside: They allowed him to learn about the human body firsthand, igniting an interest in the health professions and medical research.

Johnston is starting his senior year at Oakland University in Rochester, Michigan, where he majors in biomedical sciences and works in a research laboratory that’s investigating a protein called plasminogen activator inhibitor-1, or PAI-1. This protein plays an important role in regulating blood clotting — elevated plasma PAI-1 in the body causes impaired breakdown of clots and increases the risk of developing life-threatening clots that can travel throughout the vasculature, including to the heart, where they can cause a heart attack.

Coming from a relatively small university, Johnston says he was drawn to the Perrigo program because of the breadth and depth of research at U-M “that takes place not just in the life sciences, but across campus. I wanted to see what that was like and experience that for the first time.” His mentor at Oakland, who completed his doctoral degree and postdoctoral training in Ginsburg’s lab, recommended the program to him.

Over the summer, Johnston assisted an M.D./Ph.D. student in characterizing the structure of PAI-1 to better understand its function. Although he was studying the same protein that he studies at Oakland, Johnston notes that this project was “completely different” from his prior research experience. Rather than using mice as a model system, he performed experiments in vitro, using a technique involving bacteriophages — viruses that infect bacteria — to determine how PAI-1 interacts with other proteins.

Johnston hopes these experiences will help prepare him for medical school or possibly even an M.D./Ph.D. program — a path he learned more about this summer. He notes that another benefit of the program has been the broad exposure that the Ann Arbor campus provides across different programs and lines of research.

Of the fellow students he met at the LSI, he adds, “We all might have different projects, but we’re all scientists and we all share that same passion. It’s a nice thing, especially with the open lab space. At Oakland, we don’t have the open walls where we can mingle with other students from other labs and see other faculty as often as we do here.” 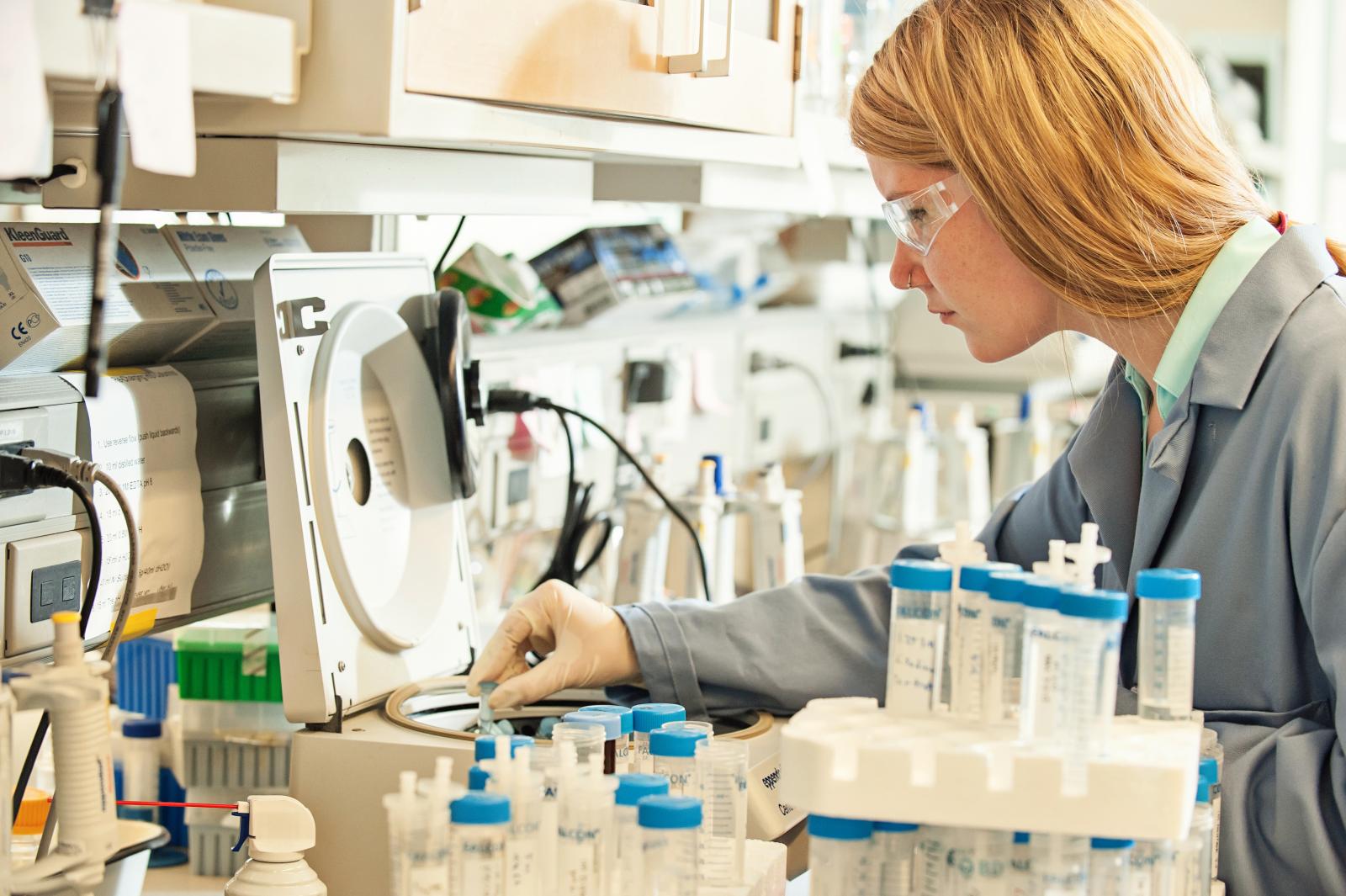 Rachel Cueny was in elementary school when she and her cousin visited the mineral gallery at the Cranbrook Institute of Science in Bloomfield Hills, Michigan. Her cousin was a geology student at that time and had traveled extensively — even visiting volcanos — to collect mineral samples. That day at the museum, his explanations about the composition and physical properties of the minerals on display mesmerized her.

More than a decade later, Cueny is pursuing her own research to glean insights into the natural world. Over the summer, the U-M student worked in the lab of LSI faculty member Janet Smith, Ph.D., researching a bioactive product made by cyanobacteria.

Such natural products are key components in a significant proportion of pharmaceuticals, says Cueny: “That’s why it’s so important to research them and understand how they function.”

In particular, her focus is on a polyketide synthase pathway — the curacin pathway — that results in a natural product with anti-cancer activity.

“I’m studying one of the enzymes in the curacin pathway,” she explains. “My project has been focused on mutating amino acid residues near an active site that appear to be participating in hydrogen bonding. By comparing mutants to the original version, we can determine which amino acids are critical to the enzyme’s activity. While we’re looking at just a small part of a larger pathway, with a greater understanding of each step, it may be possible to learn how to manipulate these pathways to generate new medicines.”

The work that Cueny accomplished over the summer as a Perrigo fellow will carry over into the school year, forming the basis of her senior honors thesis. From there, her post-graduation plans include a Ph.D. in biochemistry and possibly a job doing structure-based drug design for a pharmaceutical company.

“A lot of what I’ve been doing with enzyme characterization would be similar to studying structure-based design,” she explains. “I’ve always wanted to go into research, but I also wanted to pursue of career that would directly help people. Drug design is one of the best ways to do that with a biochemistry major.” 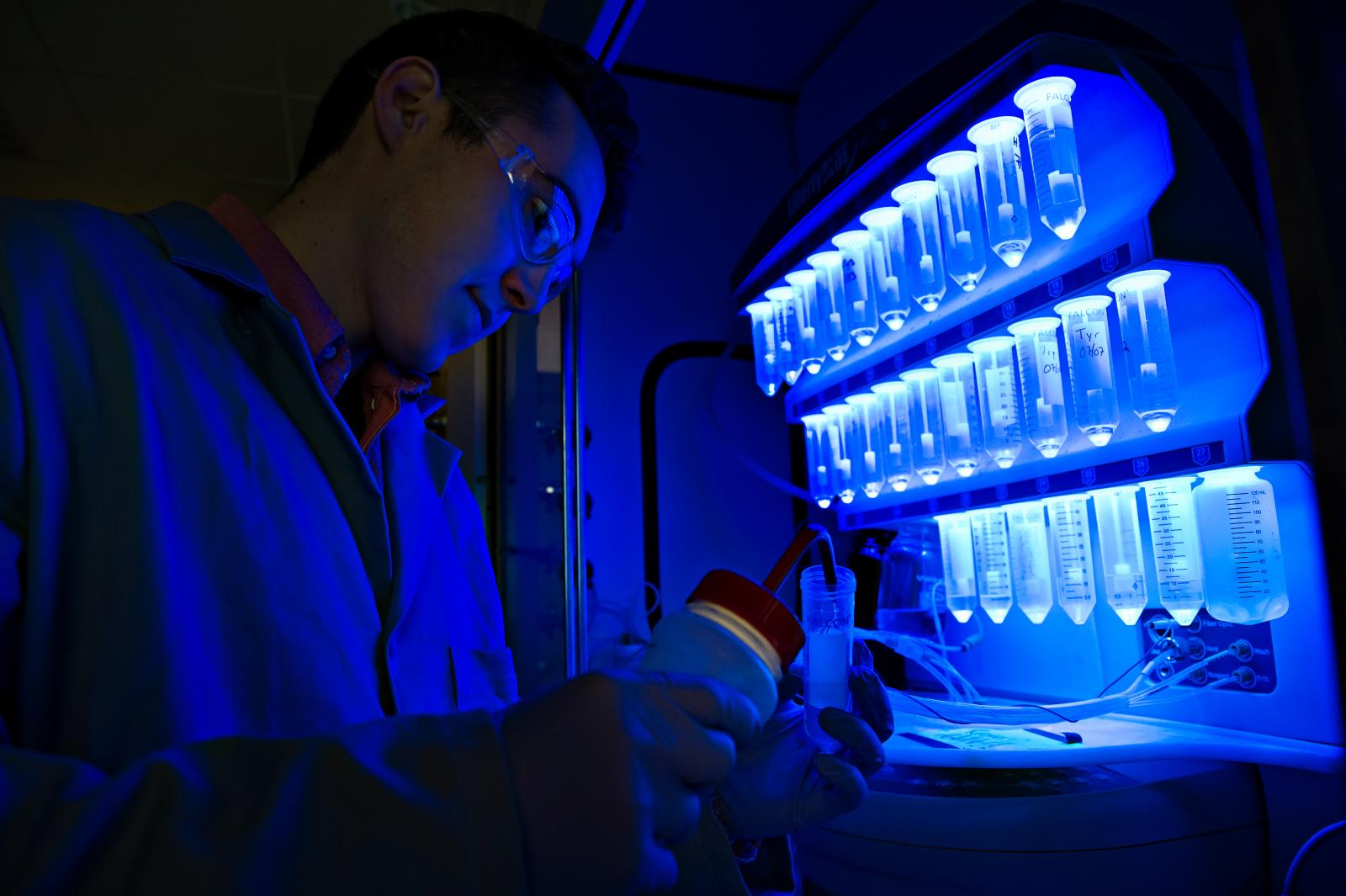 “I’ve always been really interested in how things fit together,” says Mitchell Meyer, who spent the summer working in the lab of LSI faculty member Anna Mapp, Ph.D. “I always want to know what’s one step further. Trying to see the big picture — that’s what drew me to science.”

Originally from Dearborn, Michigan, Meyer is entering his third year at Eastern Michigan University in Ypsilanti, where he majors in biology and chemistry. During the school year, Meyer works in a lab at Eastern, studying proteins involved in autophagy, a cellular clean-up system. Meyer learned about the Perrigo program through his mentor at Eastern, who completed a postdoctoral fellowship at the LSI.

“He told me that LSI is really focused on collaboration,” Meyer says. “A lot of times people who work with proteins are really focused on just one part of the field, and they don’t branch out to look at other ways they might try to solve a problem.”

In the Mapp lab, Meyer worked with two graduate students studying protein-protein interactions in a multiprotein complex known as the mediator complex, which plays a significant role in DNA transcription.

The group had been trying to image a protein called Med-25. This wasn’t easy; proteins move constantly, so they were experimenting with different methods to lock their proteins into place. “It’s like we’re trying to get the children to sit still, so the picture isn’t fuzzy,” explains Meyer.

Working in the Mapp lab over the summer involved a fair amount of problem solving. “A lot of the things we’re working on are kind of new, and no one has figured out yet exactly how to do them,” Meyer notes.

He and his group members proposed ideas about how to approach a given problem, then “combined those ideas to come up with a synergistic approach to move forward.” At the time of the interview, the group was searching for an effective method of cloning Med-25. Meyer contributed ideas that were informed by his previous research at Eastern.

After graduation, Meyer is hoping to enroll in an M.D./Ph.D. program, perhaps focusing on infectious disease and virus-host interactions.

The LSI will begin accepting applications for summer 2018 fellows in mid-November. Learn more and apply at perrigo.lsi.umich.edu.