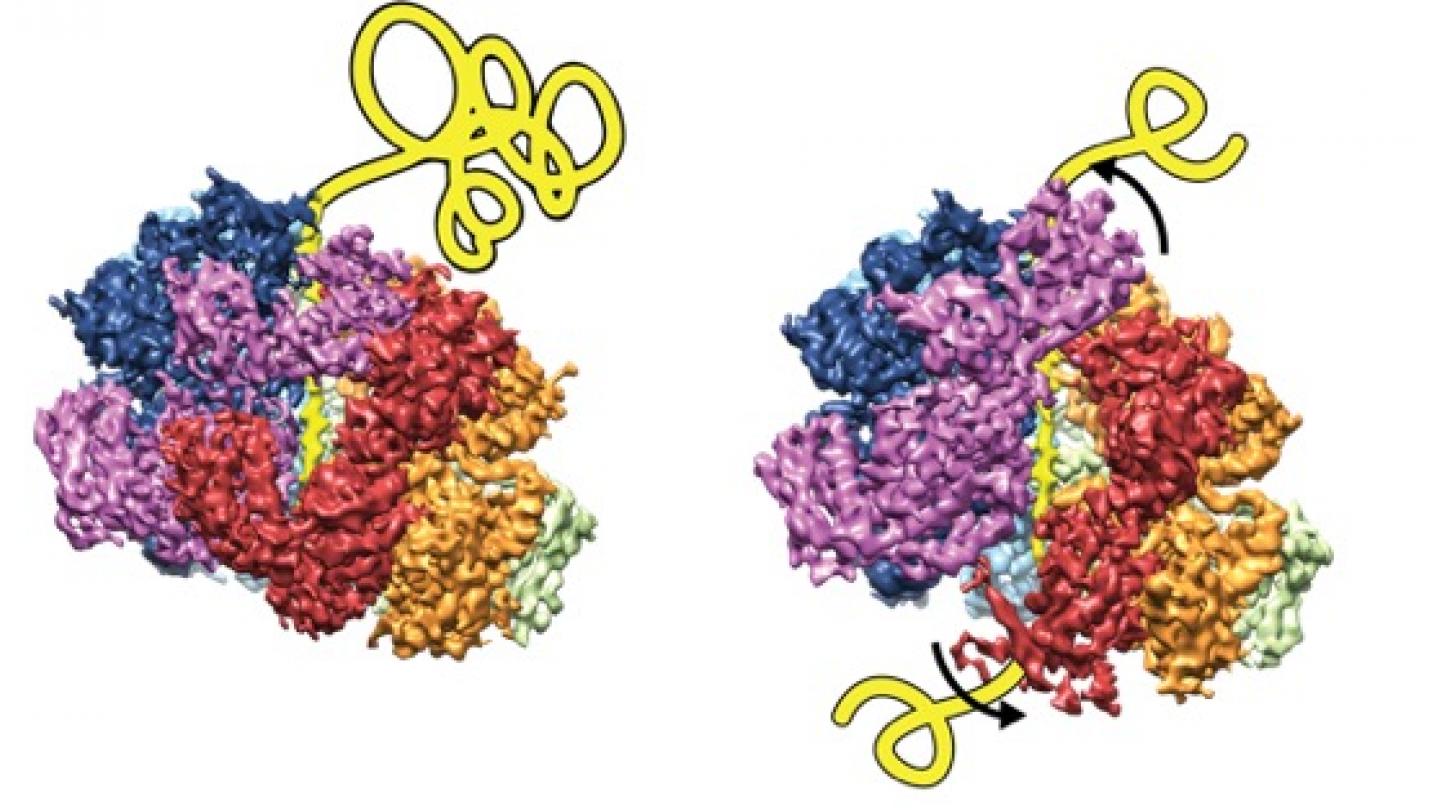 Hand over hand. That's how new, near-atomic resolution, 3-D snapshots show that a key biological machine unfolds a ribbon of protein through its central channel.

The machine is a protein complex called a disaggregase. It helps pull apart the threads of problematic, misfolded proteins that can accumulate and become toxic to cells—like the amyloid proteins associated with Alzheimer's disease. The recovered proteins are then either refolded or destroyed to prevent dysfunction and maintain balance in the cell.
The structures were determined by a University of Michigan-led team using cryo-electron microscopy, and done in collaboration with researchers at the University of Pennsylvania. Their findings, which required about 200,000 hours of computation, were published June 15 in Science.
Scientists previously understood what the disaggregase did, but not precisely how it worked.
"It appears to pull substrates through stepwise, like a ratchet," says senior study author Daniel Southworth, Ph.D., an assistant professor at the U-M Life Sciences Institute, where his lab is located, and in the Department of Biological Chemistry at the U-M Medical School. "It's a very orderly process that moves around the machine's six subunits. We can see how the proteins in the machine rearrange between different states to grab onto the next site on the substrate. There were several models that had been proposed for how this happens — and now, for the first time, we can start to see what's actually occurring."

The findings suggest there may be similar mechanisms at work more broadly across this important class of proteins, which are called AAA proteins — for ATPases Associated with diverse cellular Activities. Other members of the class, for example, are involved in DNA replication and repair. AAA proteins are found in plant and animal cells, as well as in bacteria and viruses.

A better understanding of cellular mechanisms can inform scientists' work when they're trying to develop new drugs or delve deeper into biological processes, Southworth says.
"Our study reveals how cells can break apart toxic protein aggregates to make them soluble and restore their function," he says. "If we want to try to harness the power of these molecular machines, it's important to have a clear picture of their mechanics."
Cryo-electron microscopy — or cryo-EM — is an evolving, cutting-edge imaging technology that involves instantaneously freezing proteins in a thin layer of solution. A focused beam of electrons is then used to reveal the shape of these very small, nanometer-sized objects. Specialized computer analysis is needed to combine hundreds of thousands of individual, two-dimensional snapshots in order to assemble the 3-D shape at near-atomic resolution.
The technology can also sort out proteins that are in different stages of a biological process—thus helping to piece together how a biological machine moves, changes and functions.
The U-M Life Sciences Institute is home to one of the top cryo-EM labs in the country.
The study's co-first authors were Stephanie Gates and Adam Yokom, both graduate students in U-M's Program in Chemical Biology and members of the Southworth lab.

A pair of cryo-electron microscopy-based images show the movement of the disaggregase machine as it unfolds a ribbon of protein through its central channel. Image credit: Southworth lab