A transcription factor runs through it 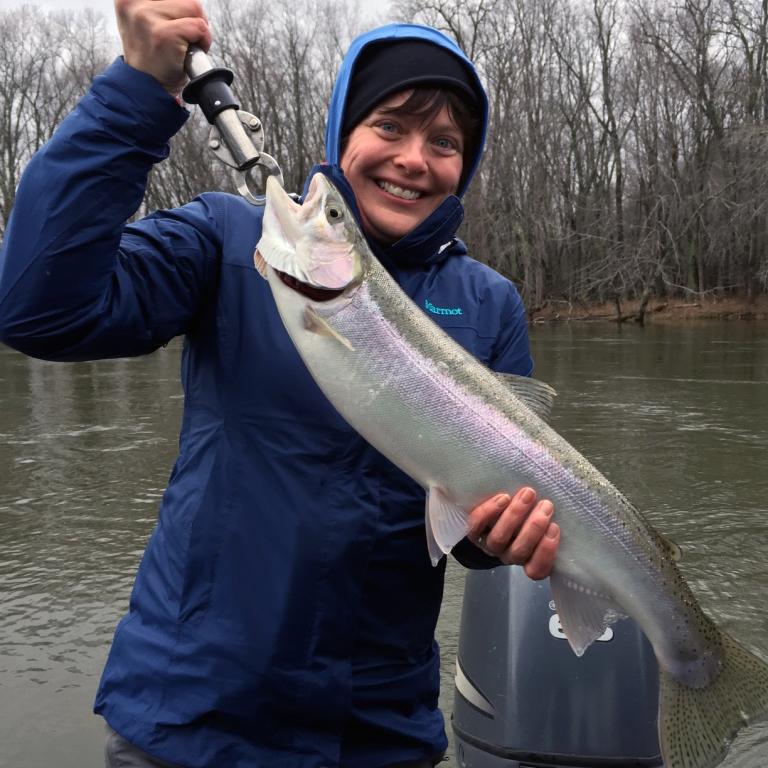 Anna Mapp, Ph.D., grew up fishing with her father in rural Tennessee. Now in Ann Arbor, she and her 11-year-old son catch rock bass in the Huron River. Perhaps it’s no surprise then, that when Mapp talks about her research, she likes to use fly fishing as a metaphor.

In her lab at the University of Michigan Life Sciences Institute, Mapp and her team are working to better understand how these particular proteins operate. The goal is to glean new insights that can then be applied to development of drugs to treat diseases like cancer and diabetes.

To help explain the assembly process, Mapp suggests we think of DNA as a river and a transcription factor as a person fishing.

“A transcription factor needs to grab a co-activator, recruit it to a gene and then let it go,” says Mapp. “If you had a really tight interaction, the whole process would just stall.”

Consider fly fishing: a single fish spends just a short period of time on the line before being released into the pile.

Her lab has developed tools to visualize the transient bonds between transcription factors and co-activators.

For example, a recent paper in the Journal of the American Chemical Society, describes how they used a technique known as covalent chemical capture to pry open the black box that shrouds the assembly of the molecular machinery that drives transcription.

The technique involves inserting a designer amino acid into the cell that causes binding partners to lock together when exposed to ultraviolet light — preventing them from going their separate ways as they usually would, and thus allowing them to be studied.

Perhaps most vexing for scientists, transcription factors don’t maintain a stable shape. They can bind to more than one co-activator at a time, and may change shape depending upon which co-activator they are bonded with.

As any fly fisher knows, no one fly catches all fish all the time, so manufactures produce a huge variety of flies. If you’re searching for brook trout in the Michigan summer, you might do best with a borcher or a flying ant. If northern pike tops your list, then you might select an all-black fly sporting a strip of rabbit fur.

So imagine a transcription factor as a person with a fishing rod and a shape-shifting fly, capable of assuming different forms, depending on which kind of co-activator it wants to snag.

Mapp isn’t daunted by the complexity. “Rather than thinking of these characteristics as road blocks, we can re-imagine how to do small molecule discovery against these types of targets,” she explains.

Rather than thinking of these characteristics as road blocks, we can re-imagine how to do small molecule discovery against these types of targets

No longer out of reach

Misregulated transcription was long considered “undruggable,” but recent advances in scientists’ ability to modulate the interactions of these proteins is unlocking new possibilities, Mapp says.

There is “considerable cause for optimism that the goal of transcription-targeted therapeutic agents is no longer out of reach,” she and two members of her lab wrote in a Nature Chemical Biology commentary last year.

Already, studies demonstrate that it’s possible to block a transcription factor-coactivator bond that causes some leukemias. Mapp hopes that her lab’s research with small molecules may eventually result in “a viable therapeutic candidate” for the disease.

The last 15 years have fundamentally changed the way we think about transcription factors, and about proteins more broadly. Scientists long assumed that proteins have to fold into very stable three-dimensional structures in order to function properly. But research from the Mapp lab is laying the groundwork for a new understanding.

“It’s actually very important for many proteins to have parts that can move around, interact with different molecules, and function in a context-specific way,” says Mapp.

Meanwhile, she notes, there are a few broader similarities between scientific research and fly fishing.

“It takes years of practice, a lot of patience and sometimes a little bit of luck,” Mapp says.

Anna Mapp's lab at the University of Michigan Life Sciences Institute uses the tools of synthetic organic chemistry, biochemistry and molecular biology to better understand how genes are regulated.